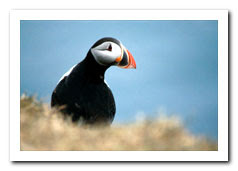 Once you come up all the way to Akureyri, then you literally are just a few miles away from the Arctic Circle.

And who would say no to an inviting trip all the way to the northmost inhabited island of Iceland - Grimsey -lying on the Arctic Circle that is a home to a very special community of around 150 people and around 1000 seabirds?

The island (of about 5 square kilometers in area) stands alone far out on the horizon as a blue cliff, sourrounded by the wide Arctic Ocean, about 40 km off the north coast of Iceland.

The islanders live in a small village by the harbour - a prosperous and fertile community with many children. The courages fishermen of Grimsey harvest the rich fishing banks all around the island but often venture bravely in their small motorboats much further north on the Arctic Ocean.

Summer in Grimsey means sun 24 hours until late July, when twilight begins to decsend around midnight. Something very special for all those who are used to stars on the dark summer skies at nights. The birds nesting in 100-metres high cliffs are a paradise not only for birdwatchers and it´s not a surprise that Grimsey belongs to one of the best birdwatching sites in the country.

Are you motivated enough to check this island out, enjoy unique local life and even get a certificate for crossing the Arctic Circle? Here are the possibilities:

You can get to Grimsey either by ferry from Dalvík or by plane from Akureyi.

Taking the ferry
It´s an experience on its own to sail for 3 hours from Dalvík, eventually spotting whales on the way, exploring the island including its 800-year old church and going back the same day.

It´s important, though to bear in mind that boat departs from Dalvík only 3 times a week. It leaves from Dalvík at 09:00 on Mondays, Wednesdays and Fridays. The ferry comes to Grímsey about 12.00 at noon and departs back to Dalvík again at 16.00, the same day.

Bookings are to made at the following e-mail: jon.arnar.helgason@samskip.com

Taking the plane
During the summer time until the end of August, local company AIR ICELAND, flies every day between Akureyri and Grímsey. The flight takes around 30 minutes and the schedule is as follows:

Bookings, directly at the webpage: airiceland

PS: Although Grímsey lies on the Arctic Circle, the island enjoys mild climate.

We look forward to hearing all your impressions from your local Grímsey experience, in this special and warm community of 100 islanders and thousands of puffins.

Posted by GO local in Iceland at 2:16 PM