Hike in embrace of a small community on Troll peninsula 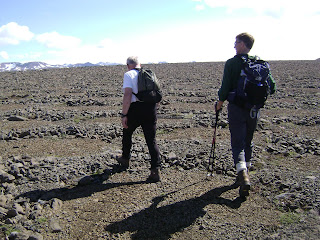 Last week of July of 2010 in northern Iceland has been very hot and pleasantly sunny.

No wonder that I ended up climbing up some slopes and hiking in beautiful area on peninsula of Trolls :)

A four-day hike was offered by an excellent enthusiast and famous skier of Iceland - TRAUSTI, who has lived in the region since he was a child and knows these mountains better than his own shoes :).

We were asked to come to his farm guesthouse in Bjarnargil on a Thursday evening. Warm welcome that one gets in Bjarnargil by both, Trausti and his wife Sibba just confirms that this place is more than "just" a guesthouse. I felt, as if I was a part of the family, and this feeling stayed with me til our last day - Sunday.

We were to have our first hike on Friday, so Thursday evening was more of a get to know each other and also getting to know saga of the place. The area along the shore called Fljótt, where many farms, including Bjarnargil belong, counts 75 inhabitants today. It was only 14 years ago, when there were 100 and Trausti believes, that mainly thanks to tourism, it is possible to have a sustainable community of 100 people living there again in near future.

Well, concerning the service as well as nature around there, I truly believe that it is feasable.

But let me share our hike of the first day, so that you can enjoy it too, should you come all the way to the north of Iceland.

Guesthouse Bjarnargil is to be found on the way to Siglufjordur. There is a significant water power plant just 10 minutes drive from Bjarnargil.
This artificial lake was the end of our first hike. But how did it all start?
Well, by breakfast table, we were shown a massive mountain range right in front of our guesthouse. A nice piece with a long a ridge and promising views from the top and many vallyes around.

We were driven to the nearest church and started our gradual ascend from the side of the mountain. Once having reached the ridge, huge stones became a nice challenge to climb over. However, it was all worth the effort as when we finally reached the highest part, which was basically a big plain, we witnessed a special nature wonder...stones formed in some sort of regular circles on the area more than 1 square kilometer. The view was awesome - clear blue sky and excellent visibility enabled us to see all the way to the glacier in West fjords. Amazing and breathtaking.

On the way down, we were meeting many streams with refreshing and pure water accompanied by nicely green moss. Riping blueberries, 2 swans being caught by a surprise on a small lake hidden in a valley, sheep herds - that was all what were meeting on our way down, still looking up in awe to our mountain which we´d just climbed.

Getting lower and lower and seeing a car in a distance which was waiting to pick us up was energy giving, eventhough we´d had 8-hour hike behind us.

Well, time for local swimming pool and a good hot pot was well used, straight after we were driven to the nearest one.

You can imagine how sweet sleep we had after a great dinner in our warm Bjarnargil guesthouse.

Check out the pictures here
Posted by GO local in Iceland at 9:42 AM