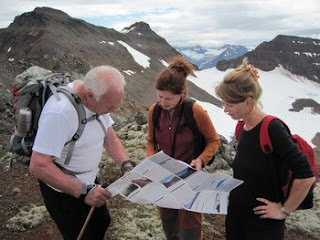 It´s Saturday. Our first hike on the Troll peninsula is over and we have a new adventure ahead of us - one day hike through a pass and sadles with some snow on the way, eventhough it´s July.
Our end destination is a great guesthouse standing at a place of an old farm in a magical valley called Svarfaðardalur - yeah, I know - not an easy name to pronounce, but the more difficult to pronounce, the more beautiful it is.

Well, and how did it all go?

Our starting point was somewhere, half way between the two fishing villages: Siglufjordur and Olafsfjordur - try to find them on the map here and the hint is that Siglufjordur is the northmost village in Iceland.

At the beginning we were following small streams and rivers and even sheep´s paths from time to time, as there are no marked paths as such. After around half an hour, serious ascend started all the way up to around 800 metres. That was one of the toughest part of our hike. It was a very steep ascend with rocks and stones breaking under our feet and rolling down. Once this challenge was over, we could see the pass that was a 'bridge' to our next valley. Snow spots were here and there and even small glaciers visible. At some points it made sense to try and sort of 'ski' down the hill on our feet.

The pass has very interesting rock formations and significant red colour rocks at some places. The view splendid again, as we were lucky with the weather. One of the stories of our guide says that there was a pregnant girl going the same way in old days and she survived and even the baby was born later on - and I can tell, this was not the easiest hike at all.

After the pass, long descend with a river accompanying us on one side started. Rocky and stony terrain would soon be replaced by grassy and mossy hills full of berry bushes. Drinking the fresh water out of streams and watching the mountains overlooking the valley where we were heading was quite some spectacle.

Having reached a gravel road that runs in the valley didn´t mean the end for us. It was a beginning of a beautiful surprise. The thing is, that our magical guesthouse Skeid, where we were expected for energy giving delicious soup and cakes, is on the other side of the river that we needed to cross. This made sense, if we wanted to be there as early as possible - not following the road- which is much longer to walk.

Forging the river in the ice cold water with rather strong current was a top of the cream of our tremendous hike. Then just passing by some marshes and there we were, welcome by Myriam - the owner of the guesthouse and very nice host all in one person.
The soup was great, the cake with fresh cream even better and the place is a must to see - regardless of the time of the year - for those interested to stay over night, contact Myriam directly: mail@thule-tours.com, particularly suitablef or families.

Well, and this is still not the end. Local swimming pool is a must, so we were picked up and driven by our Bjarnagil hosts to Dalvik - nearest town with a pool and hot pots where we let our tired bodies rest and just enjoy the beauty of the moment!

...another great day over thanks to our local hosts...
Posted by GO local in Iceland at 3:03 PM