Eastern side of Eyjafjordur - tip for a trip 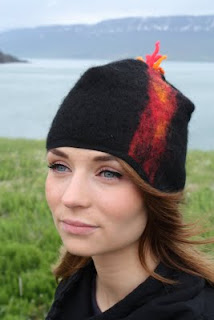 I was invited by a great local guide Birna, who has become one of our first tourism providers to join GO LOCAL ICELAND, for a 'testing tour' on the eastern side of Eyjafjordur the other day.

This meant that on a nice and sunny Friday (luckily as the day before we had snow and rain) I drove off from Dalvik and copied the shores of the fjord driving towards Akureyri and then heading to a village called Grenivik. After having passed the bridge, connecting both sides of the fjord, one gets to the eastern side of the fjord with awesome views.

The further you drive the more of the western side of the fjord gets uncovered, including a little island Hrisey with around 100 people living there.

Birna has been living at a farm called Hleskogar, which is a stone throw from Grenivik (small fishing village) where she was born.

Our tour started in Grenivik, and Birna´s story connected us fully to her ancestors who were very important fishermen in the village and we got to see and hear about what it was like at the beginning of the 20th century when rowing boats were slowly being exchanged for engine boats. Birna is a great story teller and my imagination was full of living pictures as she was bringing us back to history of Grenivik when already 11-year olds were working hard on boats.

There is a little museum by the shore, which will be open during the summer between 1pm - 5pm so make sure you pay it a visit - even-though it does not have signs in English yet, one gets to picture the past well thanks to the objects and pictures displayed.

On the way from Grenivik to a farm, Birna showed us one of the oldest outdoor pool in Iceland beautifully hidden in a gorge. You feel a real pity, knowing that there´s a big questionmark whether to renovate it or not. I hope it will turn out well and we´ll have a dip there in near future.

Well, having been introduced to a local farm setting and shown a unique plant that only grows in one particular stone and nowhere else in Iceland, we had a nice walk overlooking the fjord and listeining to Birna´s stories (including a mystery about one maybe an old grave?..).

Last but not least, being invited to her house and tasting local fish dish and a local cake with home-made cream, was a nice ending of the whole trip.

The tour was around 4 hours, including the introduction to their own hydro-power station that is fully servicing the farm. Thanks to great real stories Grenivik became more alive for me than before and I even discovered places I definitely want to go back to.

On top of this, there are some amazing hiking trails in an area called 'Fjordur' and basically the whole eastern shore of Eyjafjordur Latrastrond is worth the whole day visit and strolling and discovering remains of abandoned farms.

So - plenty to choose from for a local traveller, just roll out the map and make up your mind.