A Czech runner, who doctors said might never walk again after a car crash, had finished a 30-day run around Iceland in September 2012. 38-year-old Rene Kujan has run 1,340 kilometres (838 miles), equivalent to 30 marathons in order to raise money for the Wheelchair Sports Club in Prague.
The quest has earned him the moniker of the "Czech Forrest Gump", after the film character who spent years running across America in the 1994 US film.

We, at GO LOCAL ICELAND, have interviewed Rene and are glad to share it with you here below.

Interview:
1, What is your biggest memory from your visits in Iceland?
When thinking of my last visit, out of 5, then definitely the chance to meet an excellent marathon runner Ívar Josafatsson. Truly deep experience happened on my first and last day of the run around Iceland in 30 days. It is mostly thanks to Ívar and some other great people. The first day was rather modest, I was accompanied by a few runners. However, meeting each and every of them was very important to me. When it comes to natural beauty in Iceland, I simply have to mention the whole Iceland. Each and every corner of this land has its own charm. I like ‚meeting‘ these places and, they, in return show me something new back each time. I love coming to Dalvik, where we met some really nice people and I might end up going to Grimsey one day from there.

2, What is it that makes you come back to Iceland over and over again? It is some sort of irrational attraction. And, at the same time, I´m able to rationalize it. Ilike north, plains covered with snow, winter, cold, rough nature, which actually isn´t that rough, once one tries to understand it. I like uninhabited regions, places, where one can wander for days without having car or factory smells disturbing. I like those last bits on earth, where human has not interfered much yet. And that´s exactly where Iceland has its full credit. Iceland has many regions, as described above and Icelanders should definitely protect them. There will always be more and more money at stake, however, places like this, they do not get created. If Iceland was a person, it´s very likely we´d be brothers. We´re quite similar. Sometimes melancholic, sometimes extremely merry, which can be changing very fast and we both like Northern Lights above us.

3, Why did you choose Iceland for your 30x30 project and not some other country in the world?
I´ve partially answered in the previous answer. I actually feel that it was not me choosing Iceland, but Iceland has chosen me. There, I can find all important elements I like – rough northern landscape, run and my family. Even the fact that Iceland is an island has its special charm – the borderlines are clearly set and it cannot get lost in any bigger state formation. It´s always been a separate unit, which can only be reached by crossing the sea somehow.

4, Before you started off your 30x30 journey you had certain ideas and expectations of what it would be like. Can you name at least one expectation which was met and you´re extremely happy about it, and which worry (if any) was met and you´re truly sad about it?
I´d expected I would meet a few nice and interesting Icelanders. And this has come true a my expectations were by far surpassed. I was leaving home feeling that I actually have some true friends in Iceland. I feared wind a little – and it even showed us its power big time at the beginning. It was very hard to run against the wind, which was the case during the first 10 days. After that we had really nice weather and all went very smoothly.

5, What parts of Iceland are you specifically connected to and why? (please be as concrete as possible, when it comes to places) As mentioned earlier, each and every part of Iceland has a unique charm for me and I´m able to find beauty in each and very of them. The ones that I particularly like, they include thermal wells.

6, What is it that you liked about Icelandic tourism and services during your 30x30 and what are the changes you would like to see in the future? I belong to a crowd of less demanding tourists. As long as car rentals and accommodation services function well (which, in my opinion is the case in Iceland), then everything is OK. It is handy to have enough information material about regions, and detailed publication and I reckon that there´s abundance of them, both in bookshops as well as in information centers. What is a bit pity, especially for travelers from central Europe, is the fact that Iceland is a rather expensive country. But I´m not sure, how much tourism industry as such is responsible for this.

7, If you were to give just ONE advice to a Czech tourist coming to Iceland, what would it be?
Run around this beautiful island! It is really big fun!
Posted by GO local in Iceland at 4:39 PM No comments: 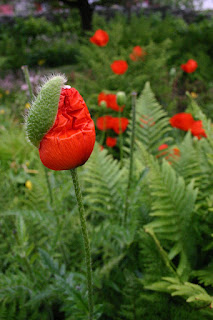 The whole journey lasted one month all in all - partly in June and partly in July. We slept in sleeping bags, sometimes in tents - mostly in camps, sometimes out of camps, by some roads, on beaches in cottages (that was the case on the peninsual behind Grenivik), and a few nights at our friend´s Lenka on matraces. A few interesting facts: Weather: Despite having been warned that it can rain loads, we were quite lucky as it rained just a little. We even got to know that June 2012 was one of the driest in the past few years. Otherwise, we fully enjoyed northern wind and sun, cold and sweaty T-shirts. There was some frost during one night. Each and every valley brought different kinds of weather. It was foggy on one, rain in the otehr one and right next to it could be a sunny valley. White nights: We got to Iceland on summer solstice and we successfully slept it over, (unlike our friend Lukas who actually danced it through by fire) even-though the sun has not set. Well, it did set after midnight, just for the sake of rising again at around 1 in the morning. We didn´t get to see darkness during our stay at all. Landscape: Volcanic, glacier-ed, fjords, sea, ocean, glacier rivers (bleary), clear rivers (not connected to glaciers), waterfalls - literally everywhere, geothermal s, plains, deserts, mountains, snow, wasteland, colours - green, grey, brown...different landscape in each and every valley - first look (wasteland impression), second look (impression of diversity), third look (breathtaking landscape). People: We haven´t met a bad person. Those who we´ve met were ready to help, without hesitation. So to answer the question of many of my friends:'What the hell Icelanders do there on that distant island?' - they live, help, fish, drink and are happy, they´re trying to solve more important and less important issues and don´t steal. Fauna: Loads of birds, sheep, horses, some hens. We´ve even seen polar fox and a head of seal. Not reindeers, though. Some spiders, surprisingly enough. Whales, salmon and believe it or not, our friends were chased by a polar bear (he was hungry and was from Greenland). Flora: Loads of flowers. They looked rather bizarre in volcanic wastelands. Even the ones familar to us from central Europe, just that they had arctic touch: dandyline, alchemila vulgaris, wild thyme... Food: Excellent butter (smjor), youghurt, chedar, beer viking, pizza, pastry was disappointing. Lamb meat and fish at Lenka´s. Couscous made in 100 ways, lentils, pasta, rice, ready made soups, oats with pudding and other similar goodies made on our gas cooker. Hitch-hiking: It was very smooth as long as we didn´t have to be at a concrete place. When we needed to catch our ferry and truly needed to get to Seydisfjordur by certain time, either there were no cars or were not ready to take us, so we ended up hitchhiking a bus.
Posted by GO local in Iceland at 4:23 PM No comments: