The best way to get from Keflavík to Reykjavík??? 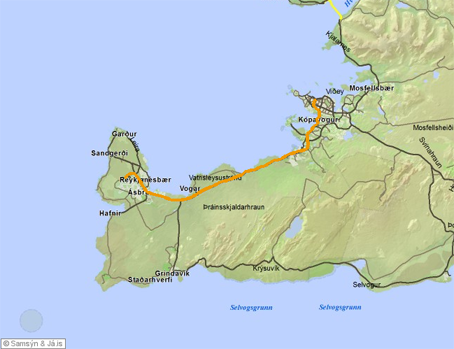 Yes, you´ve made it. You´ve finally landed on this barren island and can´t wait to explore it. BUT. Wait a moment, your landing town was Keflavík and not Reykjavík. Hm, what to do next? How do you get from Keflavík airport to Reykjavík, that are around 50km away from each other????

Well, there´s no public transport between the two and a few years ago, there used to be one particular company running business on this route. (for more details read here). That´s not the case anymore, as there´re two bus companies you can choose from these days:
FLYBUS and AIRPORT EXPRESS with the following similarities and differences:

Choose what fits you best and go ahead and book on their pages directly.

Now, those who would stay in Keflavík after their arrival and consider leaving to Reykjavík from there, you have the following options:
Taking a taxi to your place of stay from the airport (they´re parked outside the terminal building), stay over night  and then take a bus run by a company called SBK from their station located in Keflavík.
One-way ticket to Reykjavík Bus terminal costs 1.600 isk and both winter and summer schedule is to be found here (look for departures from SBK). There are only 3 connections during weekends, though.

ARE you renting a car in Iceland?
Most of the bigger car rental companies in Iceland offer pick up in Keflavík for some extra fee. It can happen that the fee will be so small that if there’s more than two of you, it will be cheaper to pay the fee, than taking the bus to pick up the car in Reykjavík. So if you are renting a car anyway, you should keep that option in mind and compare the prices.

Last but not least, taxis can take you all the way to Reykjavík, but it´s the most expensive option. The average price for 1-4 people is around 15.000 ISK. But, you don’t have to worry about being ripped off by taxi drivers in Reykjavík. Taxis run by the meter between Reykjavík and Keflavík but sometimes they offer a fixed price which comes to about the same amount as the meter anyway.

Good luck with your journeys between Keflavík and Reykjavík and do post comments about your experience.
Posted by GO local in Iceland at 5:17 PM